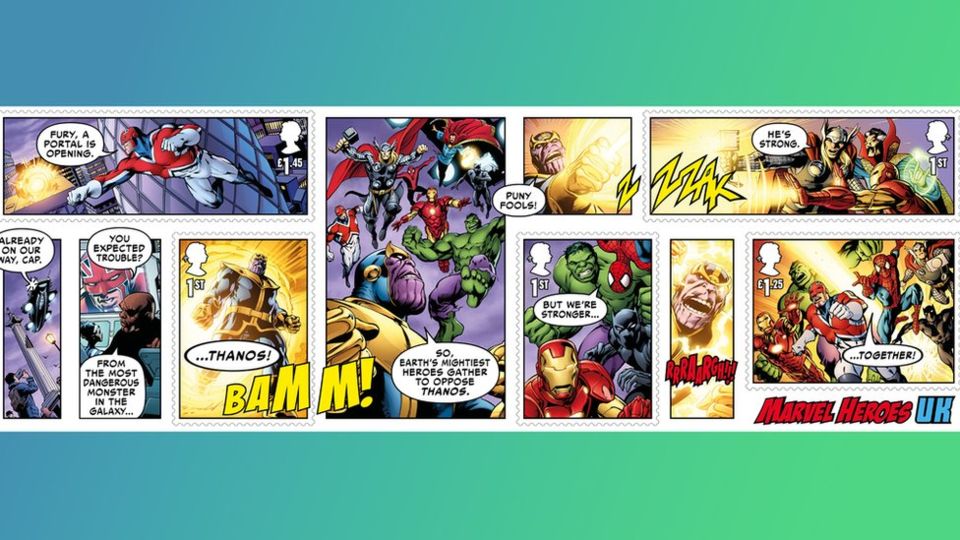 In celebration of Marvel’s 80th anniversary this year, the Royal Mail has created a 15 stamp set featuring some of the most popular and well-known super heroes.

Illustrated by renowned comic book artist, Alan Davis, who has worked with Marvel since 1981, they’re a must for any Marvel collector. Officially on sale in 7,000 Post Offices from March 14th, they’re available to order from www.royalmail.com/marvel with everything from souvenir sheets, to framed collections signed by the artist.

Philip Parker (no relation to Peter…), from the Royal Mail, said: “Generations have grown up spellbound by the adventures and the personalities of these superheroes. Our epic new stamps celebrate each in characteristic pose, emerging from the stamp frame.”

Doctor Strange – Once a brilliant yet vain neuro-surgeon, Stephen Strange sought out the help of the Ancient One when his hands were badly damaged in a car crash. Strange’s path led him to become a Master of the Mystic Arts and Earth’s Sorcerer Supreme, protecting the world from evil forces.

Thor – The mighty Thor is the Norse God of Thunder. Once cast out of Asgard for his pride, he was trapped on Earth as the injured doctor, Donald Blake. Thor’s banishment is long ended and now he protects both Earth and Asgard as an Avenger.

Captain Marvel – Carol Danvers was an Air Force officer when she met Kree hero Captain Mar-vell. After her DNA mixed with his during an explosion, she gained super powers and took the name Ms Marvel. Following the original’s death, Carol took on the mantle of Captain Marvel to honour his legacy. Marvel Studios’ Captain Marvel is in cinemas from 8 March, 2019.

Spider-Man – Peter Parker is Spider-Man, New York’s amazing web-slinging hero. Bitten by a radioactive spider as a teenager, Peter Parker gained arachnid-like abilities and, after his Uncle Ben was murdered, swore to use his abilities to help others – having realised that with great power comes great responsibility.

Black Panther – T’Challa is the Black Panther, ruler of the technologically advanced African nation of Wakanda and protector of its valuable vibranium supply. T’Challa first travelled to America to learn more about the country’s heroes and soon became a leading member of the Avengers.

Hulk – When mild-mannered scientist Bruce Banner was bombarded by radiation from a gamma bomb, he was transformed into the Incredible Hulk. The green-skinned behemoth is one of the planet’s most powerful and misunderstood heroes – feared by a world he has saved numerous times.

Peggy Carter – Peggy Carter was working for the French Resistance in the Second World War when she met and fell in love with Captain America. The two fought the Axis powers together before they were separated by the war. Peggy went on to become a leading agent of S.H.I.E.L.D. (Strategic Homeland Intervention, Enforcement and Logistics Division).

Union Jack – The original Union Jack was Lord James Falsworth, who fought in the First World War. When his descendant refused to take on the role, the mantle was passed to Joey Chapman, a working-class hero from Manchester, who has gone on to fight alongside the Knights of Pendragon and the Invaders.

Captain Britain – Brian Braddock was chosen by Merlyn to be Britain’s greatest protector. Granted amazing powers, Brian became Captain Britain. He soon learned he was part of a multidimensional Captain Britain Corps and has fought alongside Excalibur and the Avengers to keep his country – and the world – safe from harm.

Iron Man – When terrorists captured billionaire inventor Tony Stark, they forced him to create weapons. With shrapnel near Stark’s heart endangering his life, Stark tricked the terrorists, building a suit of powered armour to defeat them. It was the birth of the armoured Avenger – the invincible Iron Man.