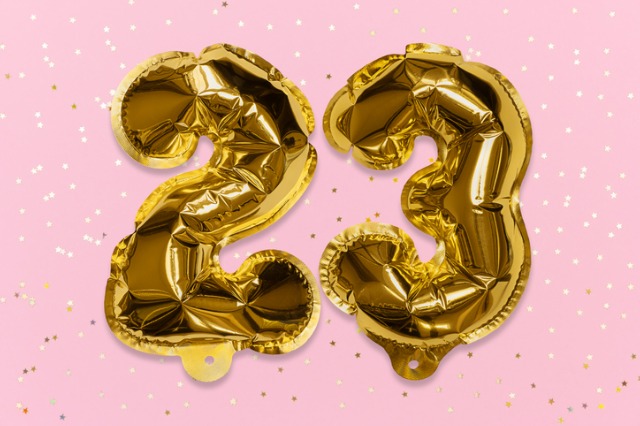 Admittedly 23 doesn’t immediately jump to mind as an interesting birthday, it’s no 21 or 25, so maybe it’s time for some insight into the 23 Enigma:

1. It’s the most commonly cited prime number and the lowest with consecutive digits.

2. There are three intriguing films about number 23, from a German true-life drama, through Jim Carey horror to Indian crime thriller.

3. Carey’s interest even extends to his production company JC23 Entertainment.

4. Nobel Prize winning economist John Forbes Nash (A Beautiful Mind) became obsessed with number 23 and felt he made the cover of Life magazine as Pope John XXIII. He was tragically killed in a taxi crash on 23rd May 2015.

5. 23rdians (yes really) are people who subscribe to the mystical power of 23.

6. The Ancient Chinese believed numbers conveyed sexuality and 23 had special status as a prime feminine (even) and masculine (odd) combination.

7. There are 23 pairs of chromosomes in the human genome.

8. The biorhythm theory is the pseudoscientific idea that our daily lives are significantly affected by rhythmic cycles, including the 23-day physical cycle (?).

10. Nicolas of Damascus reported that Julius Caesar was stabbed 23 times.

11. ‘What hath God wrought’ from the Bible, Numbers 23:23 was the first morse code message.

12. The Knight Templar, favourite of the Holy Grail theories, had 23 Grand Masters.

14. The Birthday Paradox states that 23 randomly-selected people is the smallest number where the probability of a shared birthday exceeds 50%.

15. 23 is officially a Happy number. Square each digit, add together, then repeat. If it becomes 1 it’s happy, otherwise it is an unhappy number.

16. Less happy is that the 2 handed sign showing 2 fingers on one hand and 3 on the other is used to represent 23, or W, by white supremacists.

17. 23 skidoo was American slang for making a quick exit, possibly linked to breezes on 23rd Street created by the Flatiron building, which lifted ladies skirts and encouraged peeping toms.

18. In the self-declared religion Discordianism, based on the worship of Eris a.k.a Discordia, the goddess of chaos, 23 is the holy number as a corollary of the Law of Fives 2+3=5.

19. Agents of chaos, electronic pop band the KLF published 2023: A Trilogy at 23 seconds past midnight on 23rd August, 23 years after they burnt a million pounds in 23 minutes.

20. There are currently 23 albums/songs listed with 23 as the title, covering genres from German rap, Australian rock, Japanese pop to classical and Miley Cyrus.

21. In disaster movie Airport, the bomber had seat 23, there are 23 crosses at the end of The Life of Brian, the Big Lebowski bowls in lane 23 and in Lost, 23 is one of the six candidates.

22. William Shakespeare was born and died on April 23rd, or maybe he did not, that is the question.

23. This news article took you 2minutes 30 seconds to read… well, did you check?